Fright Night, Nevada City’s Halloween tradition returns to the Miners Foundry on Saturday, October 28, 2017.  Fright Night 2017 features music by Zepparella with special guests Achilles Wheel, as well as The Novelists and Northern Roots.  Food and drinks are available for purchase.  Zepparella is an all-girl powerhouse from San Francisco, featuring the music of Led Zeppelin.  More than just a tribute band, Zepparella shows replicate the powerful improvisational musical journey for which Led Zeppelin shows were renowned. Local favorites Achilles Wheel is a rock and roll band that blurs the lines between genres and fuses an infectious blend of Roots and World Music Rockadelia.  The Novelists showcase cliffhanger storytelling, multiple lead singers, and signature four-part harmonies.  Dancing concert with limited seating available.  Doors open at 7:00 p.m. and the music begins at 8:00 p.m.  Tickets are $25 in Advance and $30 at the Door.  Tickets are available online, by phone, or in person at the Miners Foundry, or in person at Briar Patch Co-Op.  Ticketing fees may apply.

In 9 years as a band, Zepparella has released two live albums and toured throughout the United States opening for the likes of Weezer, Kiss, and Y&T.  Band members Gretchen Menn (guitar), Angeline Saris (bass), Noelle Doughty (vocals), and founding member Clementine (drums) are known internationally for their playing and have graced numerous festival stages, private parties, theatres, and down and dirty rock venues.

How to honor the legacy of a band deemed sacred?  To tread on holy ground is perilous and must be done with the intent and spirit of a disciple.  Pat attention to the intricacies of the magic, explore the far ends of the innovation, strive for ever-growing ability, and let the purity of the love for the music drive it all.  It wasn’t that long ago women rock musicians were a rare breed.  They might sign up front, or as part of a girl group, but women weren’t often seen playing rhythm or lead guitar.  Times have changed. 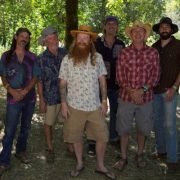 The Achilles Wheel sound comes across as both Old School and New School and is riddled with great songwriting. Supporting the benefit of our human condition is foremost in their work. They play hard as a way to break down walls and celebrate life. The idealism that they embraced as younger men has not diminished in the harsh light of the modern world as we struggle to live freely and have a good time, and in the end, hopefully matter. Achilles Wheel fearlessly sings out to these times.

With the release of their third studio recording, ‘Devil In The Yard’, Achilles Wheel is also waving the flag for Ben Jacobs (Poor Man’s Whiskey, Grateful Bluegrass Boys, Rusty Stringfield), who came to the AW studio in Nevada City to record a couple of songs, but after playing on every track he left as the new Achilles Wheel keys man. He joins Jonny Mojo Flores on lead guitar and vocals, Paul Kamm on guitar and vocals, Shelby Snow on bass and vocals, Mark McCartney on drums and vocals and Gary Campus on drums and percussion. 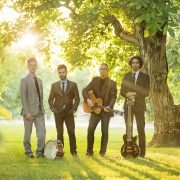 An elderly couple stands precariously on the railing of a 17th floor balcony… Two teenagers unknowingly choose a murder scene for their parking date… A young man throws off the shackles of a bullish culture.  These are just a sample of the scenes in which you’ll find yourself immersed when you listen to The Novelists.  Equally comfortable acoustic or electric, The Novelists showcase cliffhanger storytelling, multiple lead singers, and their signature four-part harmonies.

The Novelists have become a mainstay on the West Coast festival, college, and house concert circuits and are planing several national tours throughout 2017.